Giuseppe Scalarini is considered the founder of the Italian political satirical sketch. A satirical sketcher for the newspaper of the Partito Socialista Italiano (Italian Socialist Party), the "Avanti!", from 1911 to 1925, and a fervent pacifist and antimilitarist, he later on became persecuted by Fascism. He was used to signing his name with a true and unmistakeable puzzle made up by his last name: the stylized drawing of a rung ladder followed by the ending syllables "lini." 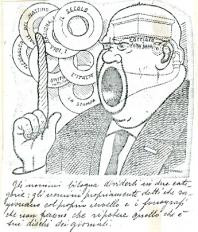