Article published on the Avanti! on January 9th 1921
This year it’s Dante’s hundredth anniversary. In my opinion, the best way to celebrate the author of the Divine Comedy would be to send to the Inferno all of those that in 1915 let hell loose on earth, and now enjoy paradise. The Inferno, as everyone well knows, is divided in concentric circles; the central circle is called the bargain circle. In every circle holes, called pits or trenches, are dug. All the sins of men that threw their country in the chasm are eternally punished in the Infernal trenches. In the first line we find the vestibule, where the slothful are: all lying low with a silken Italian flag band around their neck, chocking them. In the limbo, or first circle, we find the heroes of science that resisted Christ: teachers, professors, scientists that introduced Cain to the schools, and that, instead of illuminating minds, overshadowed them. They are condemned to wander in eternal darkness, braying like jackasses. In the second circle we find the lustful: dames that danced cancan in the military hospital wards. Now, as a punishment, they stand in line, with their feet immersed in mud, exposed to wind and rain, like the poor women of the soldiers at war. In the third circle we find the gluttonous, that hoarded flour, lard oil, cheese, etc., to gain monopoly on them, re-selling them at a higher price, and even to keep them for themselves. Here they suffer hunger, and show all their bones, due to their thinness. They are condemned to live with few dried figs, like the soldiers in the trenches, and to sing, between a fig and another, national anthems. In the forth circle we find the lavish: the ministers and the undersecretaries that spent the public funds hand over fist, for print, propaganda, committees, patriotic displays, etc. As a punishment, they have holes in their hands. In the fifth circle we find hot-tempered. Here we find, among the others, General Graziani. The damned are enveloped in a grand deal of acrid, irritating tobacco smoke, that takes their breath away. In the sixth circle we find the heretics and the doubtful, that caused offence to Christ’s true and blunt doctrine: love one another. They are all priests and chaplains that greased cannon wheels with holy water. Now they crawl, almost becoming quadruples. In the seventh circle, which is divided in three distinct circles, are the violent: Violent against their neighbour: fascists, condemned to hit with the head of their daggers an enormous boulder of red granite. Violent against themselves and dilapidated of their own substances. Here we find D’Annunzio, immersed in the Lete, an infernal river, drinking its water which makes him forget everything, even the expiration dates of his bills. Violent against nature: the barbarians that fell trees and destroyed harvests. Here they live in the underground world, along with moles, trampled by the land that they themselves trampled o when they were alive. Violent against God: the priests that put someone before God. Violent against art, the artists that painted on newspapers and walls the hell of war as paradise. In the eighth circle, divided in ten trenches, we find the deceitful: most of them are shopkeepers, with chopped off hands. The crawlers, mercenary pimps that supervised the amorous practices between patriots and supply. Here, among others, is print. The damned one that during the war up-kept the light to enlighten public opinion, now wanders in the opaque night, along with members of the board. Flatterers that licked the generals’ boots. Most journalists. As a punishment, they are immersed in a sea of ink. The flattering females, that used war to attract blackbirds in traps. Here we find Freemasonry, with a spiked mane of green snakes, knotted by bloody bandages. The simoniacal that smuggle sacred things, and who are priests themselves. They have a twisted neck, so that they can never look up. The impostors, the liars: journalists, censors, lecturers, scholars, etc. are immersed in Acheron’s swamp, filled with reptiles. Traders, that smuggled public studios: all commanders, with decoration ribbons chocking them. The hypocrites, that faked to burn of love for their country in order to trick people. Their limbs are frozen. The thieves: cotton producers, wool producers, sugar producers, bankers, tanners, ship owners, tyre dealers, aviators, paper dealers, etc. are condemned to walk on earth, once covered by roses, and now by sharp thorns, wearing shoes with a thin cardboard sole. The deceitful advisors: most of the Crown advisors. In the dead kingdom, smeared by blood, we find Salandra, Sonnino, Boselli, Orlando, Nitti, Barzilai, ect. The mob of seism sowers is empty. The forgers that changed iron into gold: ironworkers, metallurgic workers, mechanics, nationalists, etc. are now punished in the infernal forgery. In the last circle, divided in four concentric compartments, are the traitors, that in 1915 sold the country to the French and English embassies. They are immersed in the river Cocito, made up by their mothers’ tears. Here we saw Barrère, throwing handfuls of golden coins in the mouths of these dead people. The mob of seism sowers, as we said, is empty. We will fill it after the Livorno congress, throwing in those who, in times of danger, try to split the Party. And all the others that you here see spreading seism and scandals are alive: but they are stupid. Divine Comedy – Canto 28. 34 – 36. With this utter, the socialists will celebrate Dante’s hundredth anniversary.
Scalarini 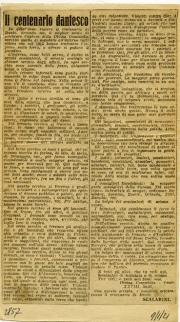 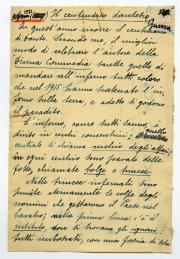 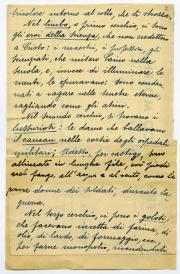 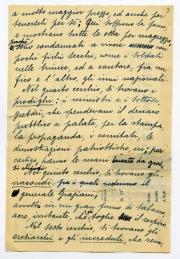 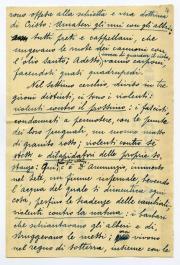 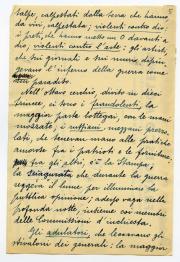 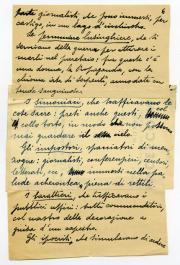 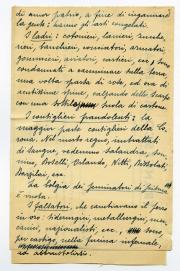 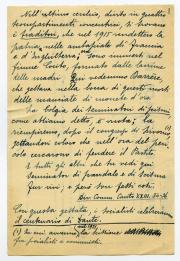