Cionciarino was a nice rosy and puffy piglet. One day, he got invited to lunch at Aunt Dorotea’s, a sophisticated old lady, on etiquette. Naturally, his father took him. Along the road, he told him to be a good boy, to answer gracefully, not to eat greedily, and not to dirty himself.  Cionciarino arrived at his aunt’s in a nice white satin dress, a white beret, white gloves, and white satin shoes; on his tail, was tied a silken red ribbon. As soon as he entered the living room, he threw himself on a flower bouquet, that was on a chair, and devoured it; then, chased by his father, he tried to escape to the kitchen, but the cook was fast in closing the door. In the meantime, the aunt, that warmly welcomed him, caressed him and gave him some candy, that Cionciarino swallowed, paper and all! Then she began to ask questions on questions, that he answered gruntingly. To escaper from that storm, all of a sudden Cionciarino ran in the garden, where he happily rolled in the puddles, and came back soaking from head to toe! When his father saw him in that condition, he turned all kinds of colours. Bye bye, lovely white satin dress! Bye bye, lovely gloves! By bye, lovely shoes! The maid wanted to wash him; but the rascal was impossible to catch, as he was running here and there. Lunchtime came. When they brought the soup, Cionciarino jumped on the table, knocking over plates and glasses, he stuck his snout in the tureen and happily began to root about. The aunt, who was indignant, went back to her quarters. The father, angry red, took him back home. Nice impression you made me have, rude boy! Father, don’t you know I’m a piggy? 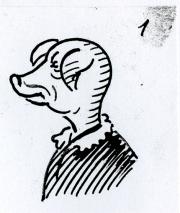 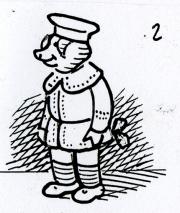 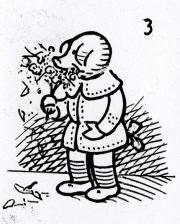 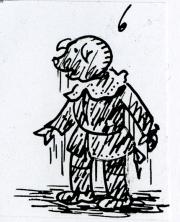 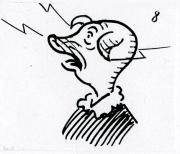 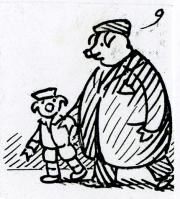