from “amico di Mussolini” (Mussolini’s friend), an article that appeared on the Avanti! on August 1st 1948
I met Mussolini at the beginning of 1913, when he came to edit the Avanti!, and I stayed with him until the end of 1914, when he had to leave the newspaper, because he declared himself in favour of the war. So we stayed together two years, but we never had a true friendship, a little due to my savage personality and a little due to his, that wasn’t very open to friendships, in fact, Mussolini, had no friends. He came from Trentino, where, close to Battisti, he had been imbued with irredentism. –If we start a war with Austria, - he told me once – I’m going.- I’m not, I answered. – Even if it were to be a defence war? – Even so. Poor people have nothing to defend: whoever owns the land must defend it. I remember a drawing that depicted a naked ceiling. –War, a poor man was telling his kids- is needed to defend our goods from the enemy. When I showed him my drawings, he confessed that he didn’t know much about them, and he, in fact, could not understand the satire; he did, however, understand it the day that I published a drawing called Judas, that represented a glowing Christ on a mountain top, and behind him, in the shade, Mussolini slowly growing closer with a dagger, to hit him from behind. A merciful hand cancelled the 33 pieces of money. When he saw it, he grew angry. –Look- he told Riboldi –how that infamous Scalarini is treating me. This was one of the few times that I clearly put it on the newspaper, because I fought institutions and not people: the war and Fascism, not Mussolini. Later Serrati told us never to nominate him again, for any reason, as if he no longer existed, and this, as we would say, death sentence, made him furious. I once drew a row of tombs along the Rubicone, with the names of the drowned, among which was his, but Serrati cancelled it. In 1914 me, him and other editors were put on trial at the Assise of Milan for the Rocca Gorga slaughter. We were absolved. Once the European war struck, the irredentist poison devastated Mussolini’s brain, who declared himself, as I said, pro-war, and therefore was expelled from the party. I saw him the day after the expulsion, at the newspaper. –Look- I told him – what I’ll publish tomorrow: the horrors of war: soldier Mussolini kills socialist Mussolini. The neutrality campaign began. In a drawing: in the war theatre, you could see a puppet theatre, and a capitalist that had Mussolini dancing, clad as a soldier, with the broadsword of intervention; here’s another one: the belligerent socialist changing Marx’s motto: Workers of all countries, slaughter one another!; here he is after the Fascist military training yelling: -Fall out of… the socialist party!; here he is drawing out his weapons against the advancing working class, while the fearful capitalist hides in a corner with his war profits, behind his back; here’s the interventionist group that he commands, asking the Country to enter in the trap of war; here he is in the mental hospital, shouting: we need plague to honour the Nation, and deducting oneself from its bad influences would be acting like a bad citizen, here he is, it’s him, the madman yelling against us because we haven’t lost our minds! Once the war struck, here’s the group pushing the wagon to which the Country is tied, going towards the slaughterhouse; here he is at the train station with a farmer: the farmer buys a one-way ticket to war while Mussolini buys a two-way one. Once risen to power, here he is with a cylinder on his head and a wallet under his arm, in the poor room of Mussolini the Avanti! Editor, commanding him to be silent; here he is on a horse, in the rank of dictators that trample on the tombs of Law, Freedom and Democracy; here he is, still on a horse, along a hospital ward, where the victims of fascist truncheons are hospitalized. In 1926 the newspaper was suppressed, and I was sent to intern. I found many officials, executives and agents I knew in Lampedusa, Ustica, Istonio, and they knew I had worked at the Avanti! with Mussolini and were convinced that I was still a friend of his. –A friend? I was with him many, many years ago! But now, any of the relations I had with him have come to a halt. –Come on!- Among us, I replied in a laughingly matter, we are worse than a cat and a mouse. You don’t believe it? Don’t you see he sent me to intern? –Politics will trick you once in a while, dear sir. You have been, are, and will be forever a friend of his because some friendships never break. I never was able to debunk this myth. If, for example, I went to the director of the penal colony to ask him for a favour, permission, or something else, he would tell me: Why don’t you ask the Minister? He won’t say no, since you are a friend of Mussolini’s! Or a common person: -Since you are a friend of Mussolini’s, couldn’t you do me the favour of writing him, about this, about that? –Mussolini’s friend- this was the title I went about in every concentration camp. One day, a few months before his horrible death, he sent me greetings through Carlo Silvestri: the hating flame had been blown out even before it blew out in Piazzale Loreto, and that day, I went back to being Mussolini’s friend. SCALARINI 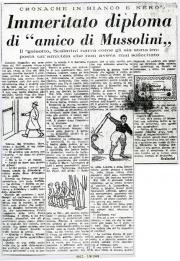 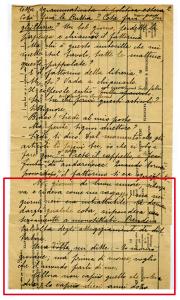